"Forget Silicon Valley. The next unicorns will be born in the Arctic cold and not in the Califo

The fact that it is not a cosmopolitan city, out of the rush and competitiveness at any price, but close enough to Toronto (a city that excels in the global business scenario), brings a great outlook to the Waterloo region of Ontario, Canada.

This small city model with a family culture and unique features - for example, you can stand on the sidewalk in front of the city hall and have a coffee, breathe fresh air and exchange ideas with someone you met there, at that moment - generates many opportunities and motivates newcomer entrepreneurs.

The Waterloo Region was colonized by communities from Germany in 1800 bringing a culture of quality of life and entrepreneurship back then. Today with a population of approximately 520 thousand people, it comprises the cities of Kitchener, Cambridge and Waterloo and other small counties. It is located in the southwest of the province of Ontario and about 100 km from Toronto, within the Canadian peninsula strategically inserted in the eastern US.

Like almost cities in Canada, Waterloo follows the national standard: cleanliness, organization, urban planning, utilities, compliance, security - everything works and cleverly. Corruption and the law of advantage are not acceptable ingredients in this community.

Green areas and conservation parks serve as connectors of the city's regions, true "greenways" that cross the city in multiple directions. Those who seek quality of life and opportunity to undertake are easily identified with the city, which has daily cultural events, various sports and leisure activities, as well as a free public education system of quality. Waterloo is in continuous motion.

and everyone can monitor it

Tax collection is easy to understand, simplified, does not penalize the entrepreneur and has a unique purpose: to invest in development, infrastructure and to provide quality services to the community. The budget is transparent and focused on the sectors in the region, among which we can highlight Education, Health, Technology and Manufacturing.

The idea is to create a virtuous circle with investments in institutions and organizations committed to economic development, innovation and attraction of talents and large corporations like Google and Amazon, maintaining incentives for large organizations such as OpenText , SunLife , Manulife and Toyota.

However, mainly in the Waterloo region, we see specialized companies developing products of the highest quality, always with a lot of innovation and entrepreneurial spirit and that become a global reference. This is the case of Kei-Kuntz , which has developed in Kitchener and produces chrome-plating that equips luxury car brands in the world such as Rolls Royce, Bentley, Harley Davidson, Mercedes-Benz, Jaguar, among others.

Over the last two years, more than

10 startups in Waterloo have become experts

in a newproduct or service of global reference

What's more, they received investments of between $ 20 million and $ 120 million each through private initiatives and business partnerships. If we look at the Toronto-Waterloo corridor over the same period, more than 30 companies received investments in excess of $ 20 million. And it is already possible to map a new generation of at least 20 new startups with prospects of receiving equal or higher investment.

The recent budget announced by Prime Minister Justin Trudeau provides $ 950 million to create what he calls a "superclusters strategy, " putting the Waterloo region as the main beneficiary.

The news is also good for outsiders. At the end of last year the government announced that it will create a faster process to issue visas for global talents with high knowledge and specific skills that are on the rise in the Canadian market.

Universities are also the focus of high government investments, attracting students from around the world, which revolve around the local economy, from the general trade to food industries, transportation and the real estate market that stands out in Canada and has Grown in exponential curve.

This whole movement generates taxes and cash for the government,

that is, investing in infrastructure and education

is an excellent business

Another consequence of this is that the Toronto-Waterloo corridor has already generated more than 200,000 jobs in the area of technology, in a few years of development this region already represents half the size of the existing workforce in Silicon Valley, California.

Around here, educational institutions are also committed to innovation. University of Waterloo, Wildfrid Laurier University and Conestoga College are renowned for investing heavily in innovation, providing education and infrastructure to generate multiple generations of entrepreneurs.

In this perspective, business incubators and accelerators such as Velocity , Laurier's LaunchPad and Accelerator Centre, and David Johnston Research and Technology Park (which is launching a Centre of Excellence in Sustainability this year) provide the ideal environment for installing new startups and global companies Such as SAP, CISCO, AGFA.

In this same environment is, for example, RemixPod , a startup that produces Podcasts and adds rhythm beats to its favourite Podcast creating a new perspective and energizing the consumption of Podcasts.

Here there is a collaborative competitiveness.

One institution challenges and

at the same time supports initiatives from other

The results achieved in any entrepreneurial ecosystem are always a reflection of the behaviour of the people who work in it. In Waterloo it is also like this, but with an important differential: the collaborative and unique way of entrepreneurship of those who live here.

Canada's openness to the immigrant and the diversity proposition as a key ingredient for innovation and creative development have generated short-term results and project an even greater expectation of future earnings for the next generations.

Interpersonal relationships have been treated almost as something that people own, develop, and sell. But in Waterloo this is much deeper: interpersonal relationship overflows with content and action. From shopping at the Saturday morning fair to negotiation meetings to developing strategic business partnerships, the behaviour is focused on developing empathy, generating a new personal connection, creating opportunities to expand relationships, without prejudice or discrimination. Everything here is very transparent. Acting with transparency is the primary attitude to build a relationship of trust and generate new perspectives. I see, I feel, a true networking in speech and practice.

Silicon Valley is just an inspiration.

Venture into Waterloo has its essence in people,

and the development and use of technology

as a means to innovate in business

Waterloo has attracted the attention of students, scientists, professionals, entrepreneurs, companies and organizations from many parts of the world. Universities and government institutions are organized and prepared to welcome international students and integrate them into the community. Respect for diversity allows the exchange of knowledge and individual growth, the richness of shared experiences in this

environment generates a new, much wider and more real vision of the problems of globalized society. In addition, it stimulates entrepreneurship and enables the creation of innovative solutions to the most complex problems facing the world.

So I have no doubts: the next unicorns will be born here, under the cold Arctic, not under the California sun. Waterloo is everything an entrepreneur can expect from an innovative ecosystem.

Luis Otávio Barrionuevo, 45, is a Brazilian, CEO and founder of IDEAILITY Business Consulting , Mentor and Advisor at LaunchPad, an startup incubator at Wildfrid Laurier University in Ontario, Canada.

- See the original at: http://projetodraft.com/esqueca-o-vale-do-silicio-os-proximos-unicornios-nascerao-no-frio-do-artico-e-nao-no-sol-da-california/

What is the meaning of success for Brazilian Entrepreneurs in Canada

"Forget Silicon Valley. The next unicorns will be born in the Arctic cold and not in the Califo 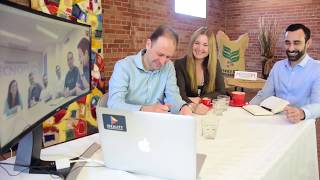